Being in India, we read of this famous restaurant Bhukara. Bill Clinton (knowing a great deal about oral pleasures) and Arnold Schwarzenegger (a fellow Austrian so to say) were also there – so why not go there for our last day in India. So be it. Reservation via telephone was nice and comfortable, also on short-term.

First of all, Bhukara is a hotel-restaurant. So you have to go to ITC Maurya, a luxurious hotel in the diplomatic district of Delhi. Kind of strange taking a tuktuk there, but anyways. I admit, I don’t like big hotels and the atmosphere is rather strange – playing posh with a bunch of Indiana Jones lookalikes running over the place. Whatever.

The restaurant looks nice, though the seats are not made to keep you there for hours. The personal is helpful, our wish to change table was not taken the wrong way… 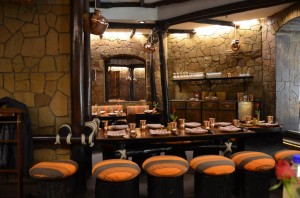 The stone age look is kind of fun, the open kitchen seems to be state of the art. I loved watching the nan-guy preparing a super-naan, that is unbelievable huge and costs 1300 INR, serving 6 persons at least with a diameter of approx 60cm! 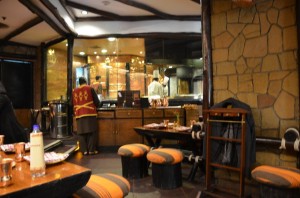 The service was fairly ok, though I’ve seen better service (more attentive at least) in this price class. They offered fresh water to drink and a warm towel to clean the Delhi-dirt off your hands and face. The cover consisted of Papadum and some kind of chili-sauce… 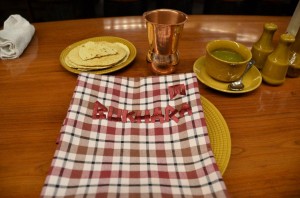 Bhukara is definetely a meat place – they have vegetarian dishes, but nobody seems to order them. The meat is amazing – one of the best grilled meats ever. Very tasty, grilled to the point and marinated super-perfect, makes you lick your fingers to savor the taste as long as possible. You eat with your hands (there the giant napkin, that is acutally an apron, comes in handy), no side dishes – just meat and bread. Like the concept 🙂

So we took tandoori chicken and peshawri kabab (pieces of lamb leg): 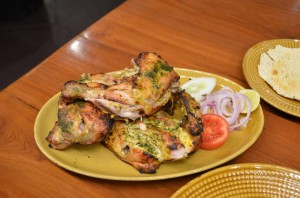 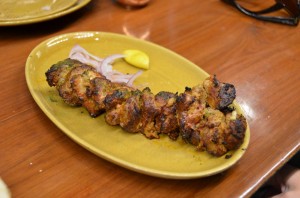 As you see, the portions where quite huge 🙂
The Desert (rice pudding with cardamon) was beautiful – driven by greed, I forgot to take a picture…

The prices for food were OK, the prices for drinks insane (15 Euros for a glass of average Australian red wine !!). We finally paid 3000 INR (approx. 50 Euros) each….

But the best story at the end: I went to the toilet. As I came out there was a servant, opening the tab and regulating the temperature for me. I go to the bassin, he asks: „Soap sir ?“. I nod, hold my hand under the dispenser, he presses for me. I was my hands, he waits with the paper towel, smiling at me…..Indian hospitality at it’s best.